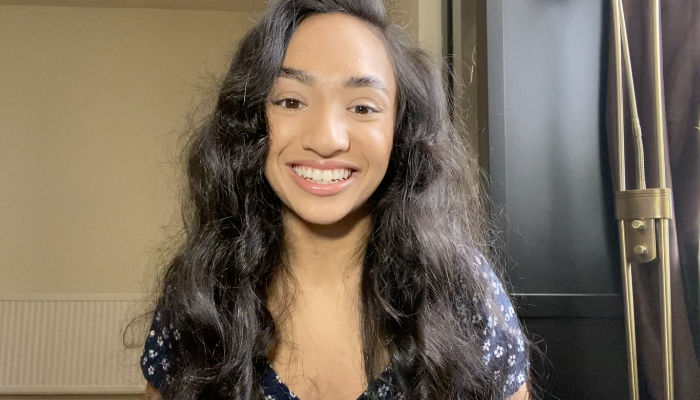 Women make up less than a quarter of the core-STEM workforce in the UK, and although numbers are increasing, to reach equality in these industries there needs to be support and promotion for younger women at all levels.

Dhavinia Chauhan is an 18-year old, young woman from Tameside who is carving out her career in computer science. Currently studying for an A-Level in the subject, Dhavinia won’t let her gender get in the way. Here is her story.

Dhavinia started to develop an interest in STEM subjects at an early age, joining coding clubs from Year 7. With a passion for wanting to build websites, and learn how the mechanics behind these systems work, teamed with support from her teachers and mum, there was no doubt in her mind that she’d take computer science as an option at GCSE – later going on to study computer science, maths, and German at A-level.

Alongside her studies, Dhavinia conducts five hours a week of home studies where she writes up software engineering and DevOps projects. To enhance her skills, Dhavinia regularly takes part in coding clubs and mentors at the Tameside CoderDojo. Additionally, she has taken part in a work experience project with Manchester Digital where she had to create an Alexa skill for its Digital Futures programme. Within the project, women from across the curriculum team designed and developed the Alexa skill which was approved by Amazon first time - Dhavinia contributed to the coding of this project.

In aims to immerse herself more in the tech world, Dhavinia attended a Hackathon in 2017 in Tameside, Greater Manchester run by Tameside’s local council, where her team won the prize of best team work. Enjoying the event so much, Dhavinia attended again in 2018, where she showed off her expertise and took the prize of best hacker. Wishing there was something like this when she was younger, Dhavinia connected with Manchester Digital’s Head of Talent and Skill, Emma Grant. Here she discovered how she could get involved in its Digital Her programme set out to raise awareness of the digital and technology sector to other young women.

Despite the fact she feels like we’re living in a decade of change, Dhavinia has been faced with several challenges when trying to enter the STEM sector.

Even from an early age, she noted there are many gender biases which could impact young women aspiring to enter these sectors. When buying presents for younger children, Dhavinia saw there was a clear distinction between toys aimed at girls and toys aimed at boys. The girls’ toys were aimed at cooking, childcare, and beauty, whereas those aimed at boys were engineering, race cars, or chemistry sets. So, even before entering the school system, young children have this inbuilt gender bias when it comes to certain subjects and interests.

Dhavinia says she had several people state that she would never be able to do computer science, with one 6th form college telling her she wouldn’t be able to do a course at their institute because “girls just won’t be able to do it.” But, this just made Dhavinia even more determined to prove them wrong, showing gender has no influence over whether someone can excel in a subject.

Although her family and friends were shocked with her choice at first – being the only one in her family to go down the route of a tech career – they have provided her with ongoing support. As a result, Dhavinia is thriving on her course, already gaining top marks. But, it’s not just Dhavinia making waves in these STEM subjects, her female friends are also thriving in their science A-levels as well, showing girls can take on these sectors and succeed.

Despite initial setbacks, Dhavinia believes there is a prosperous future ahead of her. Taking part in work experiences with OnTheBeach.com, which was set up through Manchester Digital’s Digital Her programme, she says initiatives like this have opened her eyes to the wealth of opportunities available once she finishes her studies. Also, schemes like this have boosted her confidence and allowed her to gain hands-on insights into the working world of tech. It has also opened the door to the industry, gaining experience in software engineering, front-end and back-end analytics, and project management.

When she completes her studies, Dhavinia wants to be a software engineer or project manager. As a result, being able to create the technology of tomorrow. With Manchester continuing to grow and be recognised as a vibrant tech hub, she sees the city as opening even more doors for young women, like her, as time goes on.

And what’s the best thing about being a woman in tech? Dhavinia says it’s proving tech is for everyone and that women really can do it – it’s not a male dominated subject anymore. Instead, it’s an exciting time where women can step (or step back) into the world of tech and be leaders, encouraging others.

Dhavinia is breaking down barriers and pushing her boundaries, to change people’s perceptions about women’s role in computer science. She is also inspiring and encouraging more young women to consider careers in digital and technology by being a Digital Her real role model. When questioned on her thoughts about breaking down these biases she replies with a quote by Kobi Yamada, which continues to be her own inspiration: “She turned her can’ts into cans, and her dreams into plans.”

So, what does she think needs to be done to encourage more young women into the tech and digital sectors? Well, it’s all about going into more schools, talking to young women, and showing them the real role models that exist - which is exactly what Digital Her aims to do.

But there’s also change coming, with children now being taught to code at primary school, and more and more initiatives being established to encourage women to get involved in STEM.

But, her main piece of advice for younger women wanting to get into the sector is to push their comfort zones and be bold, stating she was shy at first but has shown that if she can do it anyone can.